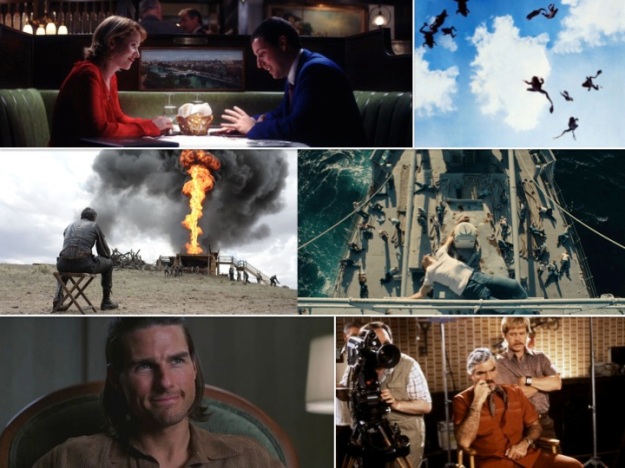 Everything is open to interpretation. That’s the beauty of things. There’s no right way or wrong way; we take what we can from what we experience. This series of posts is about the stuff that inspires me. I’m not trying to convince you – I’m just brain-dumping some fanboy love on to the page. Not everyone will agree. That’s ok.

For me, Paul Thomas Anderson is a writer/director who is absolutely dedicated to film-making as art. That doesn’t mean that he makes pretentious, inaccessible films (well, not to me) but, in a world in which movies have too often become disposable, brainless and fit for the lowest common denominator, Anderson produces work that strives for greatness. I love the scale of his ambition and that he paints on huge canvasses – although he handles big set pieces and under-stated gestures with the same skill.

Yes, he’s flawed… of course he is. Of Anderson’s most recent film, The Master (2012), Roger Ebert said, “In its imperfections… we may see its reach exceeding its grasp. Which is not a dishonourable thing.” I think I liked The Master more than Roger did, however I do agree that it’s ‘reach exceeded it’s grasp’. That’s undoubtedly a fault – but it’s actually something I also love. I always want a film-maker (or any artist) to risk failure, to strive to produce something brilliant and better and better and better than to settle for mediocre or safe… or worse.

Part of this is the way that his stories don’t only live through characters or styling or location but through the framework he uses to tell them. In Punch Drunk Love (2002), he told a story about the craziness of being love by making a film that was itself insane and disorientating in every way. There Will Be Blood (2007) is a movie about greed and power, based around the volatility of California’s oil wells at the start of the 20th Century, which rumbled along with a frightening build-up of tension and energy before gushing to a raw, unpredictable finale.

I think that actors like working with him because of these things but also because he clearly treats all of his characters with care and tenderness. This doesn’t only shine through in those that we can more easily root for, such as the naïve, eager-to-please Eddie Adams in Boogie Nights (1997) but also in characters like Daniel Plainview, the tyrannical, power-thirsty oilman in There Will Be Blood. Each is crafted, looked after as they grow and sent out in to the world with love.

That’s how he managed to pull Tom Cruise’s career-best role out the bag in Magnolia (1999) – which is a great, great film. He gave us the unexpectedly brilliant performance that it now seems Adam Sandler was always destined to deliver in Punch Drunk Love, and he brought us back a great Burt Reynolds in Boogie Nights.

Anderson is a painter, poet and storyteller. His work is brave and ambitious, it’s epic and intimate, he makes me question things I thought I already knew and he makes me want to do better, better, better myself. When I walk out the cinema having watched a Paul Thomas Anderson film, I feel as if there really is a genuine opportunity to do what Neil Gaiman told us to always do: Make. Great. Art.